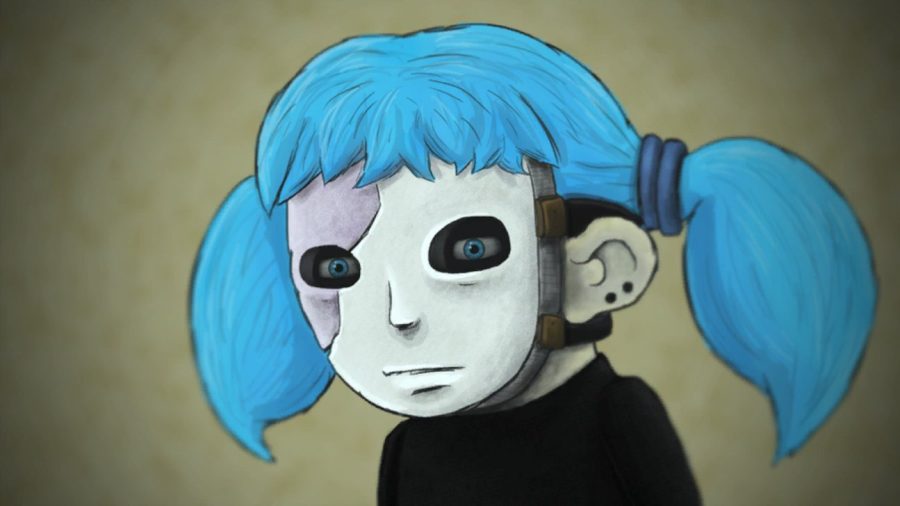 A screenshot of the game from portablemoose.com.

This story/game is a dark mystery and some people might not like the references to the dead.  There are spoilers to the game.

Sally Face is a single player scary adventure game about a boy with a prosthetic face named Sal Fisher and his father Henry Fisher as they move into Addison Apartments.

Sally Face was developed and published by Portable Moose aka Steve Gabry on August 16, 2016, you can find it on Steam for $14.98.

As you progress through the game you meet lots of memorable characters whether they’re creepy or nice and you even get the chance to talk to ghosts of the former Addison Apartment residents who explain their tragic back story and really helps bring the player in the story.

A few characters that are normally seen throughout the game are Larry, Sals best friend and later in the game stepbrother, Ashley and Todd who are Sals other friends and then Lisa, Larry’s mom and later Sals stepmom. Later in the game when they are all adults you meet a few new Addison Apartment members but unless you’re in the apartment you don’t see them much.

My favorite part of the game is episode 3, The Bologna Incident. It starts off with Sal and his friends noticing a weird number of sick kids after last Bologna day at Nockfell High School and decide to uncover the secret of what’s happening. As you go through the episode you’re faced with challenges such as getting the lunch lady to give you samples or helping Larry get into the principal’s office to get papers about the lunch lady.

Once you finally uncover Mrs.Packerton is the one making the bologna you must break into her apartment at Addison Apartments with Larry to discover the ingredients while she’s out. After searching her house you’re able to discover a goat’s head in the freezer linked to cult activity. You also discover Mrs.Pakerton’s husband tied to a bed stuck in a vegetated state who you get the choice to kill in order to save him by letting him pass on to heaven or just leave him be, and a room she uses to kill people to make bologna out of them storing their unused parts in a freezer.

After it’s been a rollercoaster of emotions for everyone, Ashley Sal’s friend discovers a trash chute that she ends up falling in and getting stuck. Sal, Larry and Todd must go down to rescue her from the dungeon that was originally used for cult activity but seems to have been abandoned for quite some time, you must go through a maze to find her and solve some puzzles on your way.

My least favorite part of the game was episode 4 since everything seems slow or rushed. It feels like you don’t get enough time to take in all the information that’s getting given to you and everything is all over the place. The puzzles also feel harder than the others since your not really given much direction to follow, your step brother just committed suicide and now you must go through the apartments with the help of his spirit to save your family and friends from the Red Eyed Demon.

There’s not a lot of time between those moments to process the story and what just happened along with you don’t get much time throughout the story anyway to spend with the characters to make relationships with them and form bonds, the most time I feel you get in the story to hang out with characters is when you first start playing and have to meet everyone in the apartments but even then you might just get thrown into another mystery you have to solve.

It’s a very interesting game and even has a 4.7/5 rating. There’s not a lot of glitches or problems with it but I feel the storyline and the way it was put together could’ve been a lot better like just giving the player those small moments with the characters just to hang out like the part where Sal and Ashley go to the lake and just talk and look out at the view.

I also feel like it wasn’t so much scary as it was just sad or depressing at moments like when learning about Megan Holmes and how she and her family got murdered by her own father while under in influence of the Red Eyed Demon and how now she must stay confined forever in the apartment she lost her life in. For a rating I’d give it a B+ for the game play and an A for the game design and character design. I’d highly recommend this for a friend.