Recent book bans in the US seen as controversial 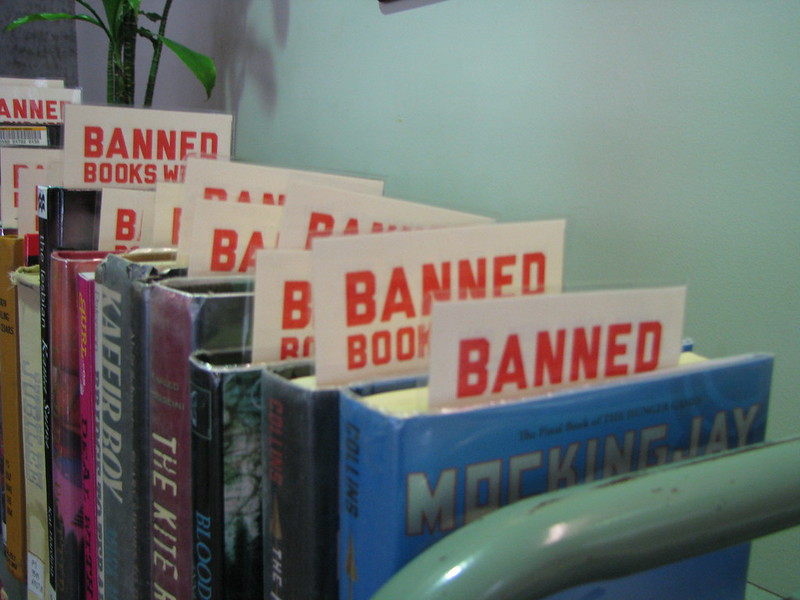 A library in California creates a book display highlighting popular books that have been banned by some.

Across the United States, there has been a spike of book bans in schools that have become controversial. The controversy is due to some groups believing some books are inappropriate due to religion, sexuality, race, and more. Other groups feel that the books should be diverse and be accessible to the students.

Librarian Deandra Gastin is in charge of the school’s library. Any complaints that parents have about the books in the library will be redirected to her for discussion.

“Part of my job is to put age relevant books and books that kids find interesting in the library,” Gastin said. “The books that are available to students should represent themselves. I believe that the diversity in books is important, including people of color or people that are marginalized by the community.”

Seventh grade ELA teacher, Bailey Wescott, believes it is important that kids have access to books that students want to see in our library. Still, the content should be appropriate for the reader’s age.

“‘Catcher in the Rye’ and ‘How to Kill a Mockingbird’ are two of my favorite novels, they’re also classics,” Wescott said. “I’m sad that they have been banned in other school’s libraries. I believe that books like those help kids learn life lessons. Kids can learn morals and feel connected to the stories told.”

Eighth grader Serenity Allen Carter thinks that most of the books banned in other school libraries are often good pieces of literature that shouldn’t have been removed.

“I think that there shouldn’t be anything too bad, but I do think that everyone should have representation in school and that includes the books,” Allen Carter said.

Eighth grader William Wallace thinks that it is fair to ban books if they can be seen as harmful to student’s learning or hurtful to people. He believes that even if someone disagrees with a book in the library, they should just ignore it and not say anything.

“It is a human right for people to read what they want to or express themselves as they want,” Wallace said. “Banning a book entirely just because it has a gay charater or a boy that resembles a girl, is frankly, just ridiculous.”

This is an issue that has been going on for years, and it’s unlikely that this debate will stop. In the end, some in our school would agree that people shouldn’t have to let their personal opinions affect the content that other students would want to see in their school library.