Standing with Courage in the face of horror 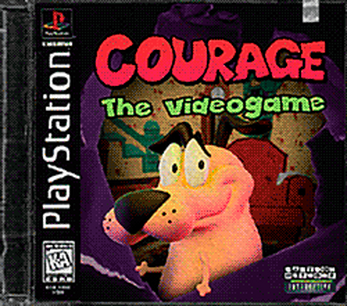 Screenshot of Courage: The Videogame from itch.io.

Disclaimer: Spoilers are included.   Some may feel the content of this game is suitable for all ages.

Courage the Cowardly Dog, a cartoon series from our childhoods as nostalgic as Ed, Edd, and Eddy, Lunchables, and Minecraft lets plays. Known for its various creepy villains, the comedic duo of Muriel and Ustace Bagge, and underlying themes, the series has recently received its first game, one that, apparently, should have come out years ago.

The game itself is a retro 3D platformer made in the style of a PS1 game, and was, according to its alleged discoverer, the only version of it, found at a yard sale. The game was uploaded to Itch.io, and can be downloaded there.

The game opens with you, as Courage, inside of the Bagge’s home. The kitchen doors are locked, and your only option is to head upstairs. Once there, you can interact with the various doors, only one can be opened however. This door leads to the computer room, a famous location from the show. After entering the room, the background music changes from the upbeat show theme, to a more dark and distorted tone. Nothing happens, and you can’t interact with anything. When you leave the room, you can see a red glow from downstairs. Going back inside the computer room will cause you to meet face to face with the Spirit of the Harvest Moon, a villain from the show. The spirit then tells you to collect all three paw prints, and you leave to collect them.

After leaving the room, you once again head downstairs, and can only leave via the front door, which leads to a large, maze-like place seemingly made of black rotting flesh. Heading straight, you will find a large room with a large symbol drawn on the floor, with a circle of chairs around said symbol. If you follow the lines in the symbol to the corresponding chairs,you will activate a section wall you can walk through. You must then push your body against the walls and run along them. When you hear the sounds of birds chirping, you know you’re getting close. Eventually, you will find a section of wall you can walk through, behind which is a small foot path made of the same rotten flesh as before. At the end of the walkway, you will find a question mark you can interact with. After interacting with it, the game will crash, this is just the way the game is designed, so just reload it.

Upon reloading the game, you will find yourself in a dark room with two white circles, one of which you are standing on. If you try to walk forwards toward the other white circle, you will just fall and the game will crash, sending you back to the beginning. Along the white circle you spawn on, there are slight differences in the textures, which indicate a path branching off from it. You can try to find and follow this path in the dark, but it’s pretty much impossible, so it’s better to just download a shader mod and follow the path that way. There are two paths you can take, one leading to the circle, and one branching off towards the left. I decided to take the left path, and after a while, I ended up at a bright light with an interactable. Interacting with it, I ended up in front of an old house in the black void. Going around the side of the house reveals that it is pretty much flat, and behind it, there is a photo of an old man labeled as “Robert W………” , the rest of the name has been burned away. Interacting with the photo will cause the game to crash as it did before.

This time, we are back in the Bagge house, but the entirety of the downstairs area is pitch black, with the only light coming from the stairs. Going up the stairs, Courage will suddenly become stuck, and a sort of cutscene will begin, with a large, demonic, skeletal figure slowly moving towards you, with the face of Robert from the photo, only dark and distorted. When “Robert” touches you, the game will crash, and you will be brought to an ending screen. From what I have heard, this is only one of three possible endings to the game, so I will be on the lookout for more.

Aside from the glitches purposely put in the game, there are no bugs, glitches, or major issues, so far as I have seen. I very much enjoy this game, its creepy atmosphere, branching paths, built in crashes, and retro PS1 style graphics make the game an interesting little horror game. The retro graphics are so well done; Courage looks like an early 3D model. If you enjoy Courage the Cowardly dog, and a lot of strange and confusing horror, then Courage the Cowardly Dog on Itch.io is the game for you.